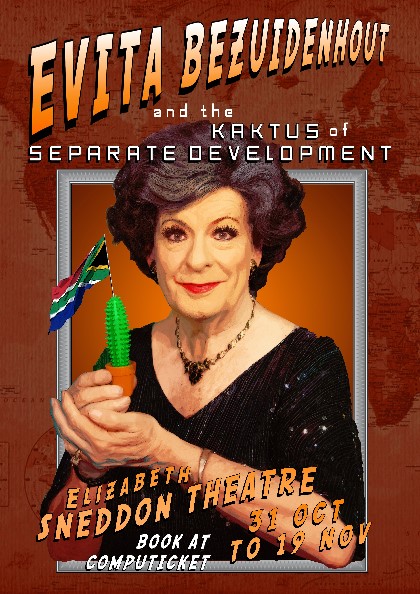 At last Evita presents her Imbizo to the people of Durban and surrounds – to remember where we come from and celebrate where we are going – with humour. With the ANC Congress due in December, Comrade Bezuidenhout is focused on the future of the party, the state of the nation and the capture of democracy. No stone is left unturned, no cow is too sacred. From her kitchen in Luthuli House, Tannie Evita takes on the Zumas, Dlaminis, Guptas, Van Riebeecks, Verwoerds, Bothas and Mandelas, with a hug for her beloved Tutu. And a diet for Malema.

Book now through Computicket – tickets cost R150, with a discounted price of R120 for scholars, students and pensioners.

WHAT THE MEDIA SAID:
“With its lights and shade carefully balanced, its quirkiness countered by serious issues, and its relentless pace, Evita Bezuidenhout & the Kaktus of Separate Development has Uys at his ebullient best to entertain his audience while exercising its collective mind.” – Beverley Brommert/Cape Argus/27.6.2017

“Since the early days of Pieter-Dirk Uys’s alter ego, Tannie Evita has always reminded us where we come from, so that we can celebrate where we are going. There are laughs aplenty and with good reason, as Tannie Evita got in both off-the-cuff and scripted gems.” – Orielle Berry/Cape Times/27. 6. 2017

“The show is a tongue-in-cheek intellectual commentary that in a public service setting makes you flinch and giggle simultaneously, as Tannie Evita ridicules both the past and the present. She delights in unashamedly peeling away at the layers of privilege and prejudice in a take-no-prisoners manner … in an intriguing showcase of satire.” – Barbara Loots/Theatre Scene Cape Town/26.6.2017

“Pieter-Dirk Uys is on top form, as always, and his flair for speaking his particular style of truth to power is a positive breath of fresh air.” – Karen Rutter/Weekend Special/25.6.2017

“What is astounding, though, is the way Uys uses his improvisational skills to carry the show through. You can’t help but feel that the whole thing is a very natural conversation between friends. If the idea was to create intimacy, he succeeded.” – Adriaan Roets/Citizen/1.6.2017

“With Evita Bezuidenhout & the Kaktus of Separate Development Pieter-Dirk Uys presents a production that is as slightly woven as Afrikaner correctness, but brilliantly disrespectful and laced with a moral twist to fit into our contemporary vernacular.” Benn van der Westhuizen/What’s On in Cape Town/29.6.2017

“Weaving through the spiky material, which is delivered with an honesty that had the audience gasping, Pieter-Dirk subtly expounds his message. And yes, there is one. Democracy first. Democracy always. Democracy forever.” Jennifer de Klerk/ Artslink/29.5.2017

“If anything, Uys teaches us to laugh at ourselves and not take ourselves too seriously. This an absolute treasure. The show is brilliant. * * * * * ” Leon van Nierop/Artslink/26.5.2017