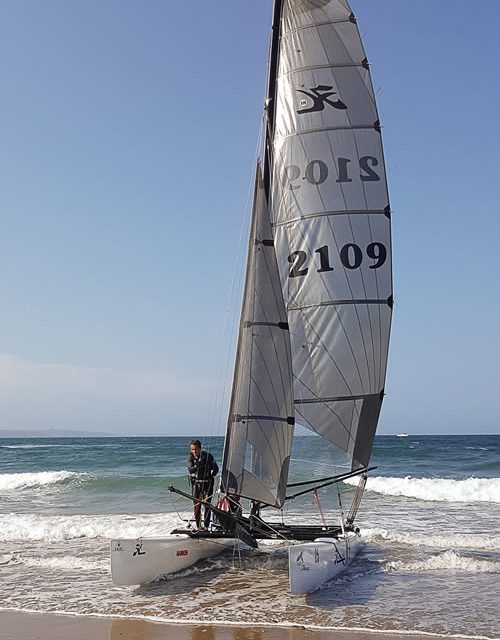 Racing from Richards Bay to Durban on Saturday 11 February, the mishmash team of first timer, 16 year old Albert from Durban North and Goodyer from Randburg, who has a few Epics under his belt, confirmed their entry the day before the long haul race, Last year I went down to the beach to watch the end of the Epic, it was so intense I just knew I wanted to do it. You have to be 16 so I knew that I could do it this year. I was still looking for someone to sail with on Thursday night when Mike kindly said he would sail with me.

This event that started off as a two-day race with a stop-over in Zinkwazi, merged into a single day dash along the coastline as it was deemed too hazardous for crafts to launch off Zinkwazi. The Epic as it is now known, is a downwind race with the starts in Richards Bay or Durban depending on the breeze. This year the race had nine entrants with four Hobie Tigers, four Darts and one Nacra F20 Carbon departing Richards Bay in 11knots of breeze.

The Grade 11 student from Reddham House uMhlanga said, The hardest part of the race had to be reaching halfway.The wind had built and was pumping, the waves were up and the spray was stinging my eyes and beating my legs.I was really tired. But finishing! With a champagne shower, that was so worth all of the effort, exhaustion and hard work!

Albert is hoping to compete in the Lake Malawi Long Haul Race later this year with his Dad, Nik and then the Hobie Worlds in the Netherlands, depending on if he can charter a boat. I think you definitely need to be mentally fit for the long haul races. And knee guards and googles should be essential kit items.

As I entered the race at the last minute, I hadnt really trained for it but in December I participated in the Youth Nationals and the ClemenGold Plett Hobie Regatta. Most weekends I have been sailing offshore and I also did the Round the Island up at the Vaal, as well as the Grand Slam at Midmar. So, I have been getting some decent water time. I am looking forward to this years challenges, and of course hoping to get some international racing experience.

The four Darts left Richards Bay at 07:00am on Saturday, with the remainder of the fleet departing an hour later. Just before midday, Lawrence Haw and Daniel Coetzer on their Dart, beached at Amatikulu Nature Reserve having run out of energy. Next to beach was the leading pair of Lee Hawkins and Kyle Bowman at Tinley Manor, with a smashed rudder gudgeon. They managed to replace the broken part then promptly smashed the other one when they tried to relaunch, forcing them to retire.

Race Director, Malcolm Gibson said, This race is like the Comrades, only on water! It takes a brave soul to conquer this race. Each competitor and their rescue team has a personal tracking device which is monitored by Race HQ. Both the Richards Bay and Durban NSRI are notified and kept informed.

Gibson continued, The Dart that beached at Amatikulu was only taken off the beach at midday on Sunday as access was near impossible. The race is Epic in every way possible, from the actual hard-core conditions, to the bonds that you make with the other competitors, to the adventure that is had from the moment the boats leave the beach, until the next time they make landfall.

Nacra sailors Mark Nicholls and his crew, John Goldsmid, who were the first to capsize in the harbour mouth in Richards Bay, broke their rudder off Tugela Mouth and retired at Zinkwazi. This left Mark Kopel and Ewald Erasmus dicing with Albert and Goodyer for line honours. Skipper Kopel opted to go inshore while Albert and Goodyers gamble of heading offshore paid off.

Hobies are fast, I love the vibe and the sailors are cool! Why would anyone want to sail anything else? the winning teen stated with a tired, but delighted smile.