The Great Moscow Circus is in town. We were there! 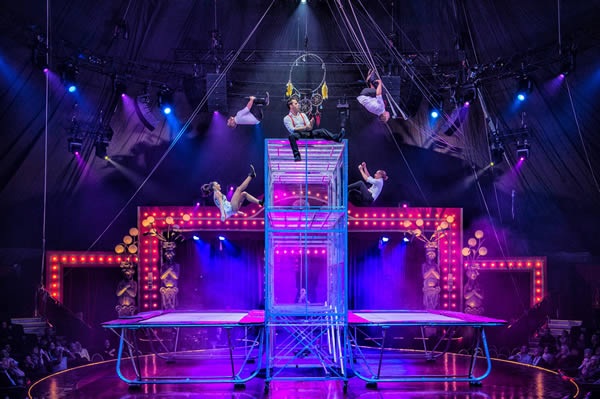 My two teens and I headed down to Suncoast on Friday night to experience the opening of the Great Moscow Circus. If you have not booked your tickets yet, do hurry! This is not a performance you want to miss.

There is much to tell, but where shall I start? The obvious place to start is at the top, in this instance The Big Top! Expertly created in Tauranga, New Zealand, especially for the South African tour, this red and yellow circus tent is, without a doubt, well-dressed. This exuberant lady has style, wearing only the best Ferrari 702 gram fire-resistant PVC, imported from France, of course! Over 2,000 square metres of this luxurious plastic is draped over her generous 46 metre (in diameter) frame. As graceful as she may appear, moving her from location to location is no mean feat and requires a team of 100 people and no less than 35 sea containers. Once relocated, she emerges with the flexibility of a contortionist from the quiet interiors of these containers and within a mere 24 hours she is standing tall again.

Back to opening night in Durban. Spectacularly lit, all eyes were fixed on the ring, which housed trampolines and an intriguing glass-walled structure that would soon be transformed to a gravity-defying catwalk. Enter The Ringmaster, Mr Stanislav Kniazkov. Expertly drawing the audience in, he masterfully contended with regular interruptions from the Master Clown, Dmitry Shindrov. They had the audience participating in no time, and in stitches!

We saw Scottish Skipping, which had the kilted Rubtsovs energetically mastering the longest skipping rope I’ve ever seen. Led by Denys Magola, a troupe of the Ukraine’s brightest stars spun and flew between the series of Horizontal Bars like Olympic gold-medalists.

The Double Giant Wheel was like a hamster wheel on steroids. In fact, it was almost too much adrenaline for me! Imagine four tons of chrome spinning through the air, with each wheel occupied by an unharnessed acrobat.Other acts included the Quick Change Tranformationists, Sixto and Lucia, Juan Pablo Martinez – who takes juggling to a whole new level and a contortionist from Dagestan, named Emin Abdullaev, who almost made the audience’s eyes pop out. Balancing artist, Sascha Williams treated us to a nail-biting Rola Bola act that had everyone holding their breath. But there was more to come.

The grand finale grew gasps from the wide-eyed audience, as the Wheel of Death saw five (yes FIVE!) speeding motorbikes circling the inside of a steel globe. The full-throttle thrills of this act gave way to spectacular applause, as the riders emerged to greet the audience. One of the riders, Oscar Giglio Espinola, is a fourth-generation circus performer, originally from Brazil. The motorbike act is something that my great grandfather was also famous for, and it has been in my family for generations: Great grandfather, grandfather, father, cousins, and uncles. It was a tradition I wanted to continue.

Circuses may be synonymous with ringmasters and clumsy clowns, but putting together a production of this calibre is far from a laughing matter! If I owned a big top hat, I would take it off to the Great Moscow Circus! Bravo!

“The circus is the only ageless delight that you can buy for money. Everything else is supposed to be bad for you. It is the only spectacle I know that, while you watch, it gives the quality of a truly happy dream”. Ernest Hemmingway